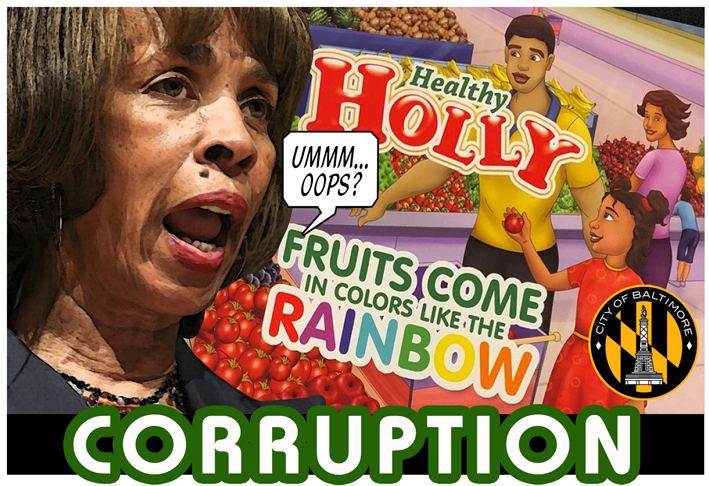 Baltimore Mayor Catherine Pugh may be going to prison.

The 69-year-old liberal black Democrat is under investigation and facing corruption allegations after she received hundreds of thousands of dollars for her self-published “Healthy Holly” children’s books from major health care companies with deep ties to the city of Baltimore.

Agents from the Baltimore FBI office and the IRS executed search warrants on Catherine Pugh’s homes, city hall, her lawyer’s office, and six other locations.

As reported by the Baltimore Sun, the University of Maryland Medical System spent $500,000 for 100,000 copies of Pugh’s “Healthy Holly” book series in a no-bid arrangement while she sat on the system’s board of directors. The University of Maryland Medical System is a private nonprofit that operates 13 hospitals and 150 other health facilities in Maryland.

That wasn’t all. Pugh also had a similar deal with healthcare giant Kaiser Permanente between 2015 and 2018 while the company was trying to negotiate a contract with the city’s spending panel to provide coverage to city employees. Afterwards, the panel approved a $48 million contract. The Baltimore Sun reported the mayor did not recuse herself from the vote despite the apparent conflict of interest.

Other charities and businesses in Baltimore also reportedly paid tens of thousands of dollars for “Healthy Holly” books. Mayor Pugh reportedly earned some $800,000 from sales! The arrangement was supposed to distribute books to low-income daycare centers and school libraries, but there’s little evidence to show the books were delivered to classrooms. Pugh was getting paid, but it wasn’t for the children’s book.

Now, outraged Baltimore residents and city council members are demanding accountability and answers from the mayor. The Baltimore City Council (made up of Democrats) is united in calling for Catherine Pugh step down as mayor. Gov. Larry Hogan (a Republican) is also demanding that the embattled mayor resign.

“Now more than ever, Baltimore City needs strong and responsible leadership,” Gov. Hogan said in a statement. “Mayor Pugh has lost the public trust. She is clearly not fit to lead.”

So far, Catherine Pugh has refused to step down, and she has gone into hiding. In fact, the mayor has been on paid leave since April 1, citing a case of pneumonia.

Liberal black Democrats like Catherine Pugh assume power by campaigning on themes like “reform” and “economic opportunity” for depressed inner-city communities, but ultimately they are seeking power and wealth for themselves. They don’t care about their constituents. These power-hungry black Democrats use their race and gender to get into office; and once elected, they use their position to steal and get rich.

If Catherine Pugh were white, she would be in jail right now! It is impossible for a white politician to commit the fraud Mayor Catherine Pugh is alleged to have perpetrated for years and still be free. I’m sure the only reason we are hearing about Pugh’s corruption is because it’s so egregious and blatant.

There is a long list of Democrat mayors and politicians convicted of corruption, theft and fraud. Two of the most notorious black Democrats are Ray Nagin of New Orleans and Kwame Kilpatrick of Detroit.

Black Democrats have a sense of entitlement. Black female Democrats are especially shameless and feel unassailable because they have been getting away with using their race and gender to do outrageous things, including blatant crimes. And when these no-good liberal Democrats are caught or questioned about their illegal and immoral activities, they immediately blame “racism” to quash and silence disapproval from the law and whites.

This is the second time in a decade that a Baltimore mayor has faced corruption allegations.

Mayor Shelia Dixon was forced to resign in 2010 after she was found guilty of embezzlement and theft.

Then there’s Stephanie Rawlings-Blake, the disgraced former mayor of Baltimore who sided with rioters against police after the death of drug dealer Freddie Gray in 2015. Rawlings-Blake and the incompetent State Prosecutor Marilyn Mosby falsely led the public to believe that Gray was murdered by police. Blake and Mosby allowed Black Lives Matter activists to riot and loot businesses in the city. At the height of the riots, Stephanie Rawlings-Blake told police to give black people room to destroy! In the end, charges were dropped against the police officers in the Freddie Gray case, but Rawlings-Blake and Mosby were never held accountable for what they did to the city. What a shame!

Most black Democrats are corrupt, and they seek political power in order to enrich themselves. It’s not “racism” that has destroyed our inner cities – it’s the Democrats, especially corrupt black Democrats.

It’s time for blacks to stop electing politicians based on race and elect their representatives based on merit and character. That is the only way to ensure real change and end the corruption in these Democrat controlled hell-holes.