Bill Lockwood: Reparations and the Failure of Affirmative Action 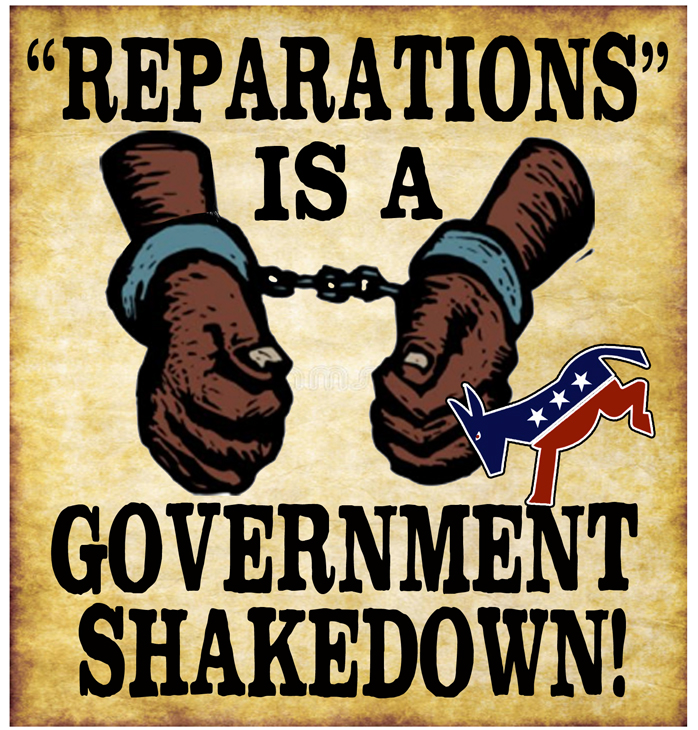 All recent talk coming from the Democrats is about current “reparations” to black Americans for yesteryear’s slavery. White America must begin paying financial compensation for sins of history. Sen. Cory Booker (D-NJ) announced a bill this week to form a commission to recommend “reparations for slavery.” Booker says this could solve the “persistence of racism, white supremacy, and implicit racial bias in our country. It will bring together the vest minds to study the issue and propose solutions that will finally begin to right the economic scales of past harms and make sure we are a country where all dignity and humanity is affirmed.”

Beto O’Rourke was against “reparations” when he was in Congress but has switcherooed to favor Booker’s commission. Whatever is vogue is what the Democrats support. Rep. Sheila Jackson Lee, another Texas Democrat, has supported reparations as well. Sen. Kamala Harris and Sen. Elizabeth Warren both cannot get on the bandwagon quickly enough.

Reparation talk is growing elsewhere. Black Princeton Seminary students in New Jersey are asking their school for reparations for slavery due to the fact that the early founders and faculty of the University had ties to slavery. A group of black seminarians have collected more than 400 signatures in an online petition calling on the Princeton to “make amends” by setting aside $5.3 million annually—15% of what the seminary uses from the school’s endowment for its operating expenses—to fund tuition grants for black students and establish a Black Church Studies program (Selwyn Duke, in The New American, 3.27.19).

This is all a tacit admission that Reparations Do Not Work to the End for Which They are Intended. Why?  Booker says reparations will “right the economic scales of past harms.” This is exactly, almost word for word, the reason Affirmative Action was instituted in America in the first place.

Consider Pres. Lyndon Johnson, in a commencement address at Howard University in 1965 on affirmative action, who opined this way about Affirmative Action:

You do not wipe away the scars of centuries by saying, ‘now, you are free to go where you want, do as you desire, and choose the leaders you please.’ You do not take a man who for years has been hobbled by chains, liberate him, bring him to the starting line of a race, saying, ‘you are free to compete with all the others,’ and still justly believe you have been completely fair …This is the next and more profound stage of the battle for civil rights. We seek not just freedom but opportunity—not just legal equity but human ability—not just equality as a right and a theory, but equality as a fact and as a result.

We were going to have equality “as a fact and as a result” provided by Big Brother Government in its meddlesome Affirmative Action programs. Compensate for past discrimination and persecution is the “reason.” The original purpose for Affirmative Action in the United States was to “pressure institutions into compliance” with the Civil Rights Act of 1964.

The current scope of affirmative action programs is best understood as an outgrowth and continuation of our national effort to remedy subjugation of racial and ethnic minorities and of women — subjugation in place at our nation’s founding and still the law of the land within the lifetime of “baby-boomers.

Apparently, the government remedy did not take. Instead of a “remedy” affirmative action has exacerbated the racial problem, so much that Democrats are seeking again to “right the economic scales” in America—exactly what Affirmative Action was supposed to do—by government fiat.

There are a few hundred questions we need answered by the Booker’s, Harris’, Warren’s and O’Rourke’s of the world before “reparations” are underway. Just a sampling of those questions are these:

Since slavery is solely of the Democrat Party in America, why not make the DNC pay the reparations?

Since American Indians practiced slavery regularly, and photos exist of Indian tribes holding white captives as slaves, will whites receive payments as well? Will the government “shake down” the Indian tribes for their historical practice of slavery?

Since “slavery” is, by definition, for all practical purposes, the process by which one person is forcibly used to serve the purposes of another, how is it that modern-day forcible financial re-distribution (slavery) supposed to “right” slavery of the past? Will modern-day slavery via the tax code be repaired? What is the difference in principle between slavery to the government and slavery to a plantation owner?

Is Booker man-enough to note that the Koran teaches slavery and Muslims have practiced slavery throughout the centuries? Shall Muslims in America pay reparations for subjugating populations of Europeans in history? Will those that support Mohammed and the fact that he owned a black slave be forced to disown Mohammed? After all, those theological students at Princeton say that “Restitution is evidence of repentance.”

While thinking of Islam, since each and every black slave that was captured in Africa and sold to English slave-traders originated with Muslim slave-traders in Africa, will those who practice Islam be forced to pay reparation? After all, why target just a few Englishmen involved in slavery? Why not cast a wider net for reparations?

Since “righting past wrongs” is Booker’s game, what about abortion? Since abortion is the taking of innocent life, will the Democrat legislation force those who have aborted children to pay into a general fund for usage by others? Or, is our grievance against sin selective? Only some sins need apply.

And since abortion rates are higher in black communities than in white communities does this mean that more blacks will be paying than whites? Or, is abortion off-the-table as far as discussion is concerned?

Since the black Princeton Theology students tell us that “reparation is evidence of repentance” do they also teach that it is the government’s job to force repentance among the population? Is asking for free-will contributions the same as a government shakedown?

While on theology students, perhaps a biblical passage will help us. Ezekiel 18.

Israelites in Babylonian captivity were self-righteous. They were disposed to shift blame off of themselves and lay it partly upon their fathers and partly upon God. Shifting blame to some other quarter that we might be just and God unjust is still prevalent among men!

Their Illusion is that they were suffering, not for their own sins, but the transgressions of their fathers. Their proverbial statement to that effect was, “The fathers have eaten sour grapes and set the children’s teeth on edge.” An old proverb repeated by the modern-day Democrat-Socialist. The prophet dispels this idea in the balance of the chapter.

Ezekiel lays out four cases to illustrate Divine Justice. Number one: the righteous man (v. 5-9) is just (dealings with others) and will live. Number two: a wicked son of a righteous man (v. 10-13). The father will not be held accountable for the sin of the son. Number three: a righteous son of a wicked father (v. 14-18). Here is where liberal idea of reparation rests. Must wickedness of past generations be paid today? The inspired prophet’s answer: NO. The principle is: The soul that sins, IT is the one that shall die! (v. 2).

Number four: Ezekiel has one more scenario (v 21-24). The wicked AND the righteous. If the wicked repents, then he is forgiven. If the righteous apostatizes, he is lost. This involves a change, not in the character of one generation to the next, but in the character of the individual. Such is repentance. Princeton Theology students and the Cory Booker’s of the world notwithstanding.