Jesse Lee Peterson: WHY CHRISTIANS ARE LOSING THEIR COUNTRY 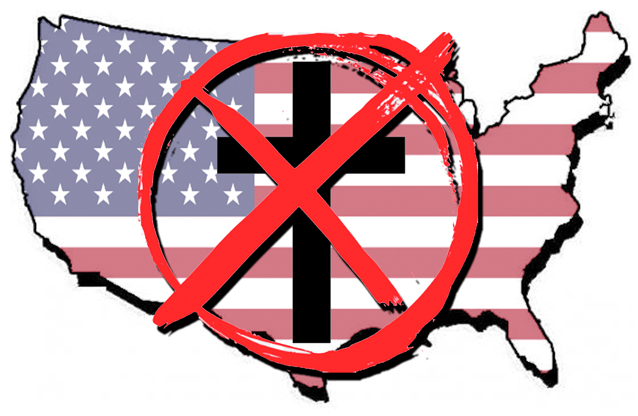 America is a Christian nation, but that fact has been under attack by the children of the lie. The left has pushed immorality to the point we have so-called “same-sex marriage” and “transgender” nonsense trampling the rights of Christians. “People of color” and “women” join the attack on freedom of speech and our rights to self-defense. Good people are accused of “hate speech,” punished for telling the truth in public – or even in private!

Christians, men and especially white people are under attack. Christians are forced to bake “gay cakes” for homosexuals pretending to get “married.” Men are falsely accused of “sexual harassment,” “sexual assault” or of being “child molesters” – and they’re not allowed to say the women are lying! Children are abused by women, even killed in the womb, and the man can’t do anything to protect his children. White people are called “racist” just for loving their country, for telling the truth about “people of color,” or for standing up for white people.

A decade ago, the fallen messiah Barack Obama claimed America is “no longer a Christian nation.” He pushed homosexuality and transgender madness, and took up for Muslims at every opportunity. He was the first “feminist” president, and loved abortion.

Obama attacked whites and police, making blacks feel justified in their anger and false victimhood. He brought Black Lives Matter to the White House – a group worse than the KKK, founded by black lesbians, homosexuals and white “social justice warriors.” They killed the souls of black people by pushing anger, and their attacks on police resulted in an increase in murders around the country.

You cannot be a Christian and support the Democrat Party. After Obama, they’ve only grown more radical, electing far-left Muslims, homosexuals, and women – in order to attack a real men, President Trump. Donald Trump represents everything they hate – the goodness of America. The straight, white, conservative, Christian man of power built this country. But leftists don’t want America to be made great again, so they go after all males, white people, and Christians in order to take down Trump.

This week, they went after Democrat Joe Biden – Obama’s vice president. They accused him of sexual harassment with no proof. For years, Biden openly kissed and tried to flatter women and little girls in front of cameras – never trying to hide it. But now people impulsively judge him as “creepy,” watching suggestively edited videos that play on the imagination and people’s anti-male brainwashing. In the old days, men warned you to believe none of what you hear, and only half of what you see.

But Biden as a hated “white male” is not welcome in the Democrat Party. They want a woman or a “person of color” to run for president.

Men have been trained by women to show affection, to worship women, make them feel special – but only with “consent.” Meanwhile, women throw themselves on men, hug and kiss men without permission, sexually assault them, and even rape men and young boys. Even Christians join in on this double-standard, in which every man is a suspected “rapist” or “child molester.” At our recent Men’s Forum at my nonprofit BOND, a home contractor said he wears a camera on himself all day to prevent being accused!

The city of Chicago recently elected a black lesbian for mayor. She’s pretending she will end the corruption in the city. But she herself is morally corrupt – she has no values. She’ll go after the Christians, white people and men, and only further destroy the city.

There are homosexuals who are stuck in that lifestyle but know it’s wrong. But this new mayor-elect, Lori Lightfoot, is promoting wrong as right. Similarly, Pete Buttigieg, a homosexual millennial mayorof South Bend, Indiana, is trying to run for president. The corrupt liberal media love him for being shamelessly homosexual. The former mayor of Houston, Annise Parker, is a lesbian with a pretend “wife.” Females on the Supreme Court and in Congress have conducted so-called same-sex “weddings.”

In Ireland, they have a homosexual prime minister who brought his gay “partner” to America for an official event with Vice President Mike Pence. This man, Leo Varadkar, gave a slap in the face to Christians, speaking against “discrimination.” The radical homosexuals are allowed to discriminate against Christians, but not the other way around. There is no freedom.

Christians have lost their countries because Christians are no longer any different from the world. They believe that they can be born again of God and continue to sin. The men are controlled by women – they kiss up to women in their personal lives and in politics. The whites are afraid to tell the truth to the people of color. The Christians have anger in their hearts, playing God – there’s no love in anger, but only fear, doubt, worry and insecurity. Christian parents are sacrificing their children to corrupt schools where kids come out liberal, turning away from God.

If you want your country to be right, you have to be right. As Christ said, you must become perfect as the Father in heaven is perfect.