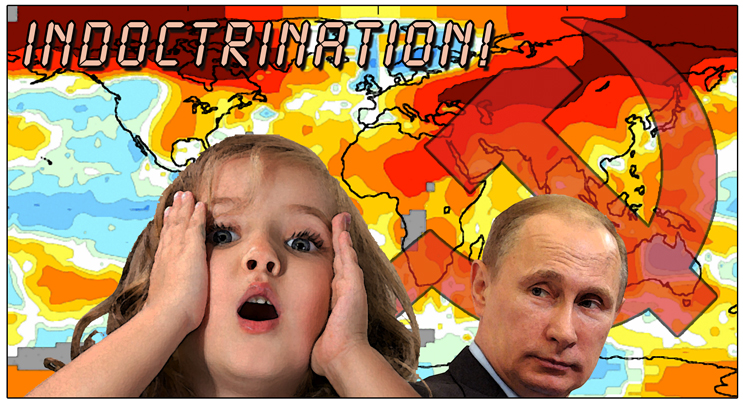 Across Europe and beyond, indoctrinated school children have been marching out of their classrooms and on to the streets to protest against “climate change.” But rather than just being the spontaneous actions of brainwashed victims of government schools, a number of high-profile voices have suggested that there is something more at work here: the Kremlin.

The most high-profile child being exploited by adults with an agenda is Greta Thunberg. As The Newman Report reported from the UN “climate” conference in Poland, the autistic Swedish girl’s face has been plastered across newspapers and TV screens worldwide by the establishment media. She began skipping school to protest “climate change.” And that promptly got her an audience with presidents, United Nations leaders, European Union bosses, and so on.

But now, there is good reason to believe that there is something even more sinister behind the exploitation of these whiny children by Western adults with sinister agendas. Consider the recent comments made by German Chancellor Angela Merkel at the Munich Security Conference. Speaking of Russian hybrid warfare and disinformation aimed at manipulating public opinion and destabilizing governments, Merkel suddenly mentioned the children protesting for the “climate.”

“In Germany now, children are protesting for climate protection – that is a really important issue,” said Merkel, a “former” communist who openly admits that her half-baked “climate” policies are making her nation more dependent on Russian energy. “But you can’t imagine that all German children, after years, and without any outside influence, suddenly hit on the idea that they have to take part in this process.” A spokesperson later tried to walk her comments back, but it was a bombshell.

Last month, Belgian “Climate” Minister Joke Schauvliege made very similar remarks about the brainwashed young “climate” activists. “I know who is behind this movement, both of the Sunday demonstrations and the truants,” she said in a speech. “I have also been told that from state security. I can guarantee that I do not see ghosts alone and that climate demonstrations are more than spontaneous actions of solidarity with our climate.” She was eventually forced out for saying that, but again, it was huge.

Obviously, plenty of these poor children really believe the lies they are being fed in their government schools. For instance, all over the Western world, captive children are being taught that the gas they exhale, carbon dioxide (aka the gas of life), is “pollution” that must be taxed and regulated by the UN to save humanity. It seems they never learn that human emissions of CO2 make up a fraction of 1 percent of all the “greenhouse” gases present naturally in the atmosphere.

But the idea that Russian authorities would be manipulating and weaponizing gullible, indoctrinated young people to march against their own freedom and energy security is hardly far-fetched. In fact, just last year, a congressional report exposed the Kremlin’s bankrolling of U.S. “environmental” groups dedicated to destroying the American energy industry. Russia, of course, is heavily dependent on its energy exports. And now that America is the largest energy producer in the world, the Kremlin is turning to dirty tricks.

If Western children were being properly educated at school, there is no way the Russian government could convince them to go out and demand their own enslavement — much less get them to protest against the essential-to-life gas they exhale. But unfortunately, they are not being properly educated. Instead, they are being deliberately dumbed down and indoctrinated on an industrial scale.

Parents must step in to protect their children immediately, or their own offspring will end up being weaponized against faith, family, freedom and America. Whether the Russians or homegrown totalitarians do it matters little. What matters is that the future is literally at stake.