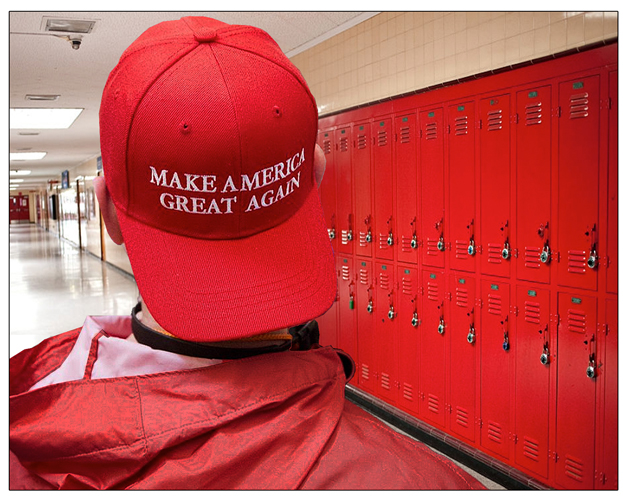 More than half of California’s children cannot read at even a proficient level, and more than a fourth of the state’s students are now “gender non-conforming.” Considering the crisis engulfing the state’s so-called “education system,” one would think that school officials would be scrambling for solutions.

But one would be wrong.

Instead, policymakers for at least one school district in California are working to prohibit students from wearing “Make America Great Again” (MAGA) hats. Yes, seriously.

While the Clovis Unified School District dress code does not specifically prohibit hats or shirts with political messages, officials decided that pro-Trump gear would not be allowed. At least one student has been told that she cannot wear a MAGA hat or any other pro-Trump clothing.

“Bottom line for us is the dress code is for kids to feel safe at school and free of distractions so they can focus on learning,” district spokesman Kelly Avants was quoted as saying in local media reports. “Here we are closer to shouting fire in a crowded theater.”

But for Clovis North High School senior Maddie Mueller, a member of “Valley Patriots” and a strong Trump supporter who was told not to wear a MAGA hat, that policy is outrageous.

“How does being a patriot in trying to show pride in your country, how is that inappropriate?” she asked. “I don’t care if I offend anybody I’m just showing support for the President and what I believe…. To my knowledge Trump is not a logo it’s a last name, it’s just our President, you can’t claim the President is a logo, sports team or affiliated with any gang.”

This is not the first time government schools in California have discriminated against students for choosing to wear clothing. As far back as 2010, school officials at Live Oak School ordered students not to wear shirts with American flags. And incredibly, the courts upheld the ban on the U.S. flag — in America!

Meanwhile, innocent children at government schools have been forced on multiple occasions to sing praises to former President Barack Hussein Obama and his agenda to “change” America. Incredibly, teachers even filmed the young victims of their dictatorship-style political indoctrination.

This blatant discrimination against conservative students and Trump supporters is only the tip of the iceberg. The government’s indoctrination system has become openly hostile to any ideas or values that contradict its own.

Considering the fact that over 85 percent of American children are captive in these institutions for five days a week, it is clear that freedom is in mortal danger. Americans must not allow this to stand.