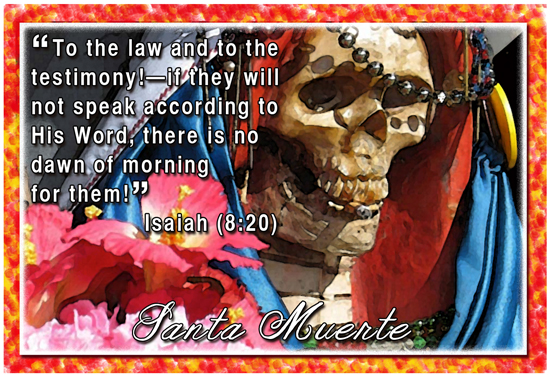 In Mexico, and in Mexican communities in places such as Los Angeles, there’s a lively movement of prayer to Santa Muerte, Saint Death. You pray to her for protection from the dangers of the night, in the conviction that she can protect you from attack, accident, and violent death. She can also bring trouble to someone who has attacked you unjustly. Prayer to Santa Muerte goes back to the religious life of people in the area before the gospel came to the Americas. (1)

Our modern era is supposed to be a bold new age that has cast off its need for God and the supernatural. According to modernists who signed the Humanist Manifesto’s I & II and the Humanist Manifesto 2000 mankind has outgrown its need for “God.” In reality, however, modernists who reject God eventually opt for the false religious ideas of man—the “god of this age” (2 Corinthians 4:4).

By the “god of this age” the apostle Paul, who penned 2 Corinthians, referred to “all the floating mass of thoughts, opinions, maxims, speculations, hopes, impulses, aims, aspirations at any time current in the world.” (2) These are precisely what are lauded by today’s cultural leaders.

A recent Pew Research study found that a large and growing percentage of Americans believe in reincarnation, astrology, psychics, and the presence of spirits in nature. The shock comes, however, in that not only do 6 in 10 Americans accept these beliefs, but that the numbers are the same among those who are self-professed Christians. Even agnostics have adopted occult ideas.

According to a new research by Trinity College in Connecticut, Wicca is one of the fastest-growing religions in the country. Between 1990 and 2008, it saw a forty-fold increase in the number of adherents. One-and-a-half million Americans now identify as either Wiccan or Pagan. As The Christian Post put it, “Wicca functions as a spiritual patina on progressive politics.” The occult is becoming mainstream in America. Such is a culture that continues to reject God.

Multiculturalism is not simply the recognition that there are various cultures in the world, or even represented in the United States. According to Charles Tesconi at the College of Education at the University of Vermont, multiculturalism specifically views “all value systems as equal.” The multicultural view treats all diverse groups and ways of life as equally “legitimate.”  “Moral diversity” is the idea. This multicultural perspective therefore de-values biblical concepts as no more valid than any pagan or heathen belief. This is what is integrated into nearly all areas of public education and entertainment. “Diversity” is the watchword.

An example is the recent Disney movie Coco, a beautifully animated film that celebrates the Mexican tradition known as Dia de Muertos (Day of the Dead). Dia de Muertos has its roots in a “pre-Hispanic commemoration of deceased loved ones that is practiced by some Latin American indigenous populations” (Smithsonian.com). The film “draws its cultural inspiration from several Mexican variations of this tradition, which also happen to be those most commonly found in the United States.”

In the story-line, Miguel, a young boy is transported to the place of the dead in order to speak with his deceased ancestors. Cynthia Vidaurri, the writer of Smithsonian’s review, then asks:

So here is the big question: Did Disney Pixar get it right? My first response is to ask another question, ‘Right by whose standard?’ Are we talking about the indigenous traditions of celebrating ancestors as they were practiced before the arrival of the Europeans? … What about the Day of the Dead that merged with Roman Catholic practices after the arrival of the Europeans in the Americans? What about the Mexican national celebration? What about the Day of the Dead tradition introduced to the U.S. by Mexican Americans during the Chicano Movement of the 1960’s and 1970’s? Or maybe the Day of the Dead Traditions that are practices by recently immigrated Indigenous Latino populations in the U.S.?

The Smithsonian plainly challenges the cultural norm that was once common-stock in America—Christianity. Right by whose standard? There is no ultimate standard to multiculturalists. This is what we are being constantly fed, from the entertainment industry to the schoolhouse where “diversity” reigns. Little wonder that various forms of superstition such as Wicca, occultism, and prayers to Santa Muerte are being practiced. Remove the One True God from the culture and everything else becomes fashionable.

Many of Isaiah’s day (8 centuries B.C. in Israel) felt the same way. Turning away from God, however, they turned to superstition. Isaiah, the inspired prophet of God, relates that they sought spiritual guidance from “familiar spirits” and “wizards.” Some of these “chirped” and “muttered” out their instructions. Others among the Israelites assumed that dead people had access to information that was normally inaccessible to the living. They therefore sought to contact “dead people” in Sheol, especially their relatives to get guidance for the future or advice about coping with the crisis at hand—the threats from foreign nations (Isaiah 8:19).

Isaiah “bursts out” against all such occult practices that seek guidance from anything but God. “To the law and to the testimony!—if they will not speak according to His Word, there is no dawn of morning for them!” (8:20). Our culture condemns itself to the night from which there is no morning—if we do not seek spiritual guidance only from God.