Social Engineering, Crony Capitalism, Regionalism, Urbanism are all happening in every state – “…Let’s look at Texas…”

Let’s look at Texas; these issues are not limited to Texas, but Texas’s population growth is higher than the U.S. as a whole and twice as fast sine the 1990s, so perhaps we can see some things better there.

A DEEPER LOOK AT THE PHONY “TEXAS MIRACLE”
“Moving a business to Texas also turns out to have tax consequences that are inconsistent with the conservative narrative of the Texas Miracle.

Yes, some businesses manage to strike lucrative tax breaks in Texas. As part of an industrial policy that dares not speak its name, the state government, for example, maintains the Texas Enterprise Fund (known to some as a slush fund and to others as a “deal-closing” fund), which the governor uses to lure favored businesses with special subsidies and incentives.

“But most Texas businesses, especially small ones, don’t get such treatment. Instead, they face total effective tax rates that are, by bottom-line measures, greater than those in even the People’s Republic of California.” [Read more]

“The people of Texas have a vital interest in water.  Yet, the Texas Water Development Board is, in essence, holding a secret meeting—what they call a “unique opportunity” available only to their invited presenters and those who pay $525 to attend–to set their course on water allocation issues.”  [Read more]

If Austin planners have their way, they’ll impose a California-style ‘complete streets’ congestion-inducing nightmare. Complete streets policies seek to elevate non-auto modes of travel by using already scarce road funds to construct bike, bus, and pedestrian facilities while reducing capacity and access for autos. Voters in San Francisco just passed Proposition A, a $500 million bond measure, last November to impose a variety of traffic calming measures, which actually do anything but calm traffic. Rather they induce traffic.

The water issue is not specific to Texas, but be assured wherever you live, you are in the same metaphorical boat.

The Trans-Texas Corridor, aka the NAFTA Highway, was an early piece of social engineering. In 2006, Ron Paul said, “Proponents envision a ten-lane colossus the width of several football fields, with freight and rail lines, fiber-optic cable lines, and oil and natural gas pipelines running alongside. … The ultimate goal is not simply a superhighway, but an integrated North American Union – complete with a currency, a cross-national bureaucracy, and virtually borderless travel within the Union.”

“By design, the corridor had few access ramps and bisected communities in order to shorten travel distances.  No additional border security was planned at the Mexico-Texas border.  Chinese-owned ports on the Mexican coast were to be offloaded in sealed containers, not to be opened until they reached their final destination.  The first upgraded security check was to take place at the corridor hub in Kansas City, Kansas where a “Smart Port” was to be installed that would allow the cargo to be scanned while moving through the facility.  Efficiency and expediency of goods was the stated mission of the NAFTA Superhighway.

“The corridor itself was to hold six passenger lanes for commuter travel, four truck lanes for long hauls, freight rail and high speed rail. The right-of-way that would be condemned for the project was a quarter-of-a-mile wide, taking 146 acres per mile from Americans. The right-of-way was to be wide enough to not only house the transportation facilities, but also the hotels, gas stations and restaurants so that travelers would not need to leave the corridor.

“The corridor was backed by international investors. They were to design and build the corridor and in return collect toll fees for the next 50 years.  In return, American’s land would be confiscated, their community and emergency services bisected, all for the privilege of paying a toll to drive their children to school.

“In order to avoid national opposition to the facility, the corridor was not put forward as a project of the federal government; rather it was split into state segments, built by each state transportation department. The first critical leg of the corridor was the I-35 Trans-Texas Corridor which connected the Mexican border to Oklahoma.

The TransTexas Corridor was shot down in 2009, but it didn’t die. “In 2009, Perry scrapped the TTC plan after a series of combative town hall meetings throughout the state showed TxDOT it faced massive taxpayer resistance. “But now, the plan apparently is being implemented in small chunks, without the fanfare of divulging a statewide blueprint Perry and TxDOT may still have tucked away in their back pockets.”  [Read more] 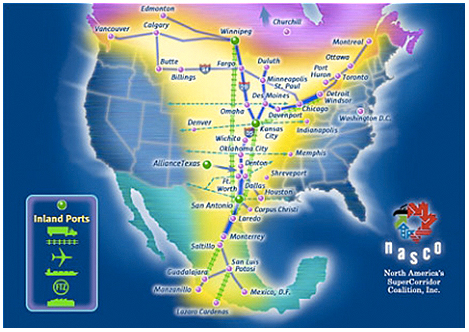 “Gridzilla, aka the California Water Model — is the ugly baby of State Rep. Lyle Larson (R-San Antonio) who is now the chair of the House Natural Resources Committee and Sen. Charles Perry (R-Lubbock), who chairs the Senate Agricultural, Water and Rural Affairs Committee. This picture of his “water grid” from the 2015 session tells you exactly where Lyle’s head is — the IH-35 growth corridor. That’s where he wants to send massive supplies of groundwater for hyper-development. Though some movement of groundwater is necessary, this is the California Water Model that took only 50 years to cause a water crisis of historic proportion.” [Read more]

The Independent League of Texas has a list of bills that need to be voted against. Texans can go to their website to find those. For Texans to find their legislators they can go here. For others, search state name, then legislature and there will be a link to a list where you can find your city, county, and state representatives.