TAKING AMERICA AND THE WORLD TO IMPOSSIBLE LEVELS

Taking America and the World to Impossible Levels – “As reality takes over and these high speed trains don’t materialize, can you imagine the mess America will be in?”

ICLEI, International Council for Local Environmental Initiatives, is now called Local Governments for Sustainability so that people won’t know that this is an international organization pretending to be a local one. ICLEI just put out its USA 2016 Report calling for a reduction of global average temperature to just 1.5° Celsius above pre-industrial levels. Because the Industrial Revolution began around 1760, when the so-called Little Ice Age (LIA ) was just ending, ICLEI and the global elite would have the world reducing carbon output below zero; if we hadn’t had an Industrial Revolution, if we were still living at subsistence levels, we would still be warmer than what they want us to achieve. How do you think they expect to get there?

“Spurred by calls from the communities most exposed to climate change impacts, the Paris Climate Agreement set the ambitious goal of limiting the end-of-century global average temperature increase to 1.5° Celsius (2.7 degrees Fahrenheit) above preindustrial levels.

The Paris Agreement includes Nationally Determined Contributions, reductions in GHG emissions by country — which offer this reality: In 2030, global emissions will be 22 gigatons of CO2 equivalent (GT CO2e) higher than the level needed to stay on track towards the 1.5° target and 15 GT CO2e higher than the level needed for a 2.0° scenario (UNFCCC analysis, May 2016). This is roughly equivalent to the emissions produced by 4,400 coal-fired power plants in one year.

The global community must push to peak greenhouse gas emissions by 2020, eliminate the use of fossil fuels in the power sector by 2050, and deploy negative-emissions strategies by 2040 in order to protect the most vulnerable (Climate Analytics, October 2016).”

How do ICLEI and the global elite propose to reach “1.5”? They have a blueprint for that – Agenda21/Sustainable Development, and tools to achieve their goals. The original tools are found in The Global Biodiversity Assessment, seven pounds of tools. As science advances more tools are added, but let me show you some of those tools.

As Stephen Frank puts it, “The city is now given building permits for condo’s/apartments that do not have any parking spaces, but include bike racks instead.  Imagine the culture of this city if no one owned a car, and Ford/Chevy and Toyota were criminalized?

“What San Francisco believes it can do, however, is improve life in the city by making it easier to get around without a car. This week, its Board of Supervisors approved an ordinance requiring developers to stock new residential or commercial projects with more alternative-transport perks than ever before. This is no all-out war on vehicles, but rather an attempt to cut down on the number and length of car trips the natives take each day.”

“Our vision includes a national HSR Express system connecting cities and states into an integrated system, laid out in phases with an aggressive schedule for full system build out.  Our vision sets high standards for interoperable, state-of-the-art dedicated track, advanced control systems, elegant multi-modal train stations, and top-of-the-line 220 mph trains connecting major cities together.  Our plan calls for a support network of 110 mph trains connecting smaller cities and towns together with the high speed system.”

Their vision is beyond pie-in-the-sky. The first map shows their vision completed; the second, what is now. A very long — and expensive — way to go, yet cities are being restructured to remove cars now. As reality takes over and these high speed trains don’t materialize, can you imagine the mess America will be in? 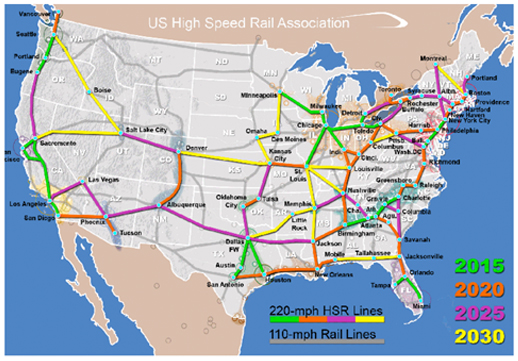 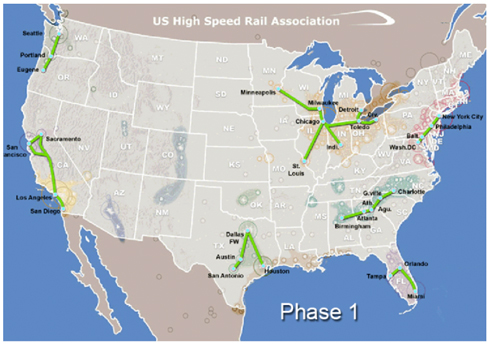 In the maps of US High Speed Rail, is included this map below showing the plan for a Regional America. Regionalism is the key tool I spoke of above to be used to bring America down – down to 1.5. 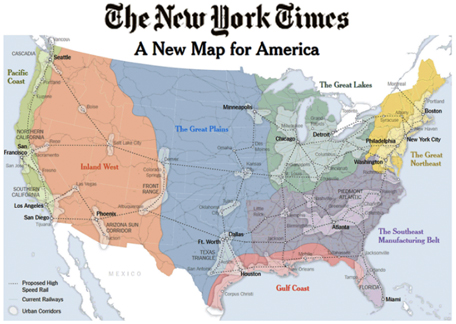 The key tool is regionalism.

In her article, Charlotte Iserbyt quotes from Dennis Cuddy: “In “The Globalists,The Power Elite Exposed”, page 304, Denis L. Cuddy, Ph.D, says “Most members of the European Union are already members of The Socialist International, and if other nations around the world can be moved toward socialism and regional economic arrangements, then these regional groupings can be more easily merged into a world socialistic government.

This scenario is quite similar to the three-stage plan outlined by Stalin at the 1936 Communist International. At that meeting, the official program proclaimed: “Dictatorship can be established only by a victory of socialism in different countries or groups of countries,” after which there would be federal unions of the various groupings of these socialist countries, and the third stage would be an amalgamation of these regional federal unions into a world union of socialist nations.”

Iserbyt goes on to note: “In socialist countries, metropolitan regions enjoy metropolitan regional government and comprehensive planning. Of the many regions on the vast territory of the Soviet Union the Moscow Region commands special attention, for it has been, since the 1917 Revolution, the country’s economic and political center.

The economic and functional efficiencies and the social benefits that comprehensive national, regional and city planning make possible in socialist society explain the Soviet Union’s enormous and rapid economic and social progress. Conversely, our profit-oriented ruling capitalist class makes comprehensive social and economic planning impossible, causing waste and chaos and dragging the entire nation into misery and suffering as its rule deteriorates and declines.”

To close, another bit of Iserbyt elucidation:

“The power elite understood that it would be difficult to get the people of the world to accept a world government all at once, and so a gradualistic approach was suggested. Association of Helpers member and Canadian Rhodes scholar P.E. Corbett in Post-War Worlds (1942) wrote: “A world association binding together and coordinating regional groupings of states may evolve toward one universal federal government. World government is the ultimate aim, but there is more chance of attaining it by gradual development.” More recently, at Mikhail Gorbachev’s first State of the World Forum in 1995, Zbigniew Brzezinski (President Jimmy Carter’s National Security Advisor) announced that we “cannot leap into world government through one quick step, but rather via progressive regionalization.”

Wanting to get to global government faster, we are now being pressured to undo the modern world – that is, for us. The elite will keep all modern amenities. But we, who must live under their rules, regulations, fees, taxes, penalties, are now told we must go back to a subsistence living – to grow our own food, to live without air conditioning and modern appliances, to be as close to animals as they can manipulate us into being.